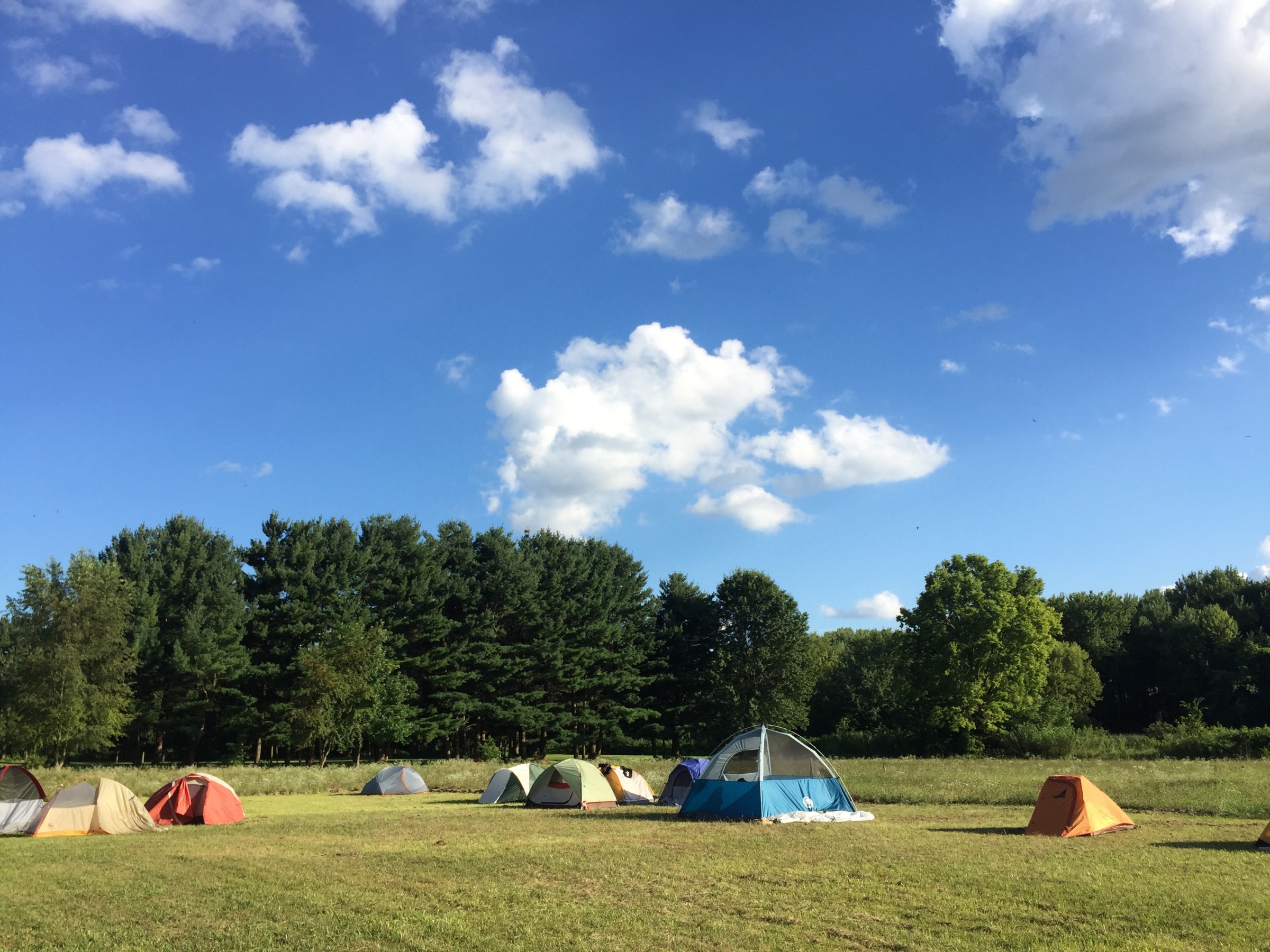 Since I’m lying here awake (and have to get up for work in 6 hours…sigh…) I thought I’d share some stories and photos of the last few weeks we’ve had this summer. We did a Black River float trip, a lake weekend, saw Wilco at the Fox Theatre, celebrated my grandpa’s 70th birthday (and engagement! Oh yes, grandpa is engaged…) and I went on an all women’s motorcycle camp out with M and K near Mississippi Palisades State Park. Now, I do not ride motorcycles…M does. It’s severely tempting…I met some serious badass women and had an incredible weekend with them. What an unbelievably supportive and empowering community! I’ll delve further later in the post!

On to the photos. Here’s a few from our float trip with a disposable camera. Ancient technology: 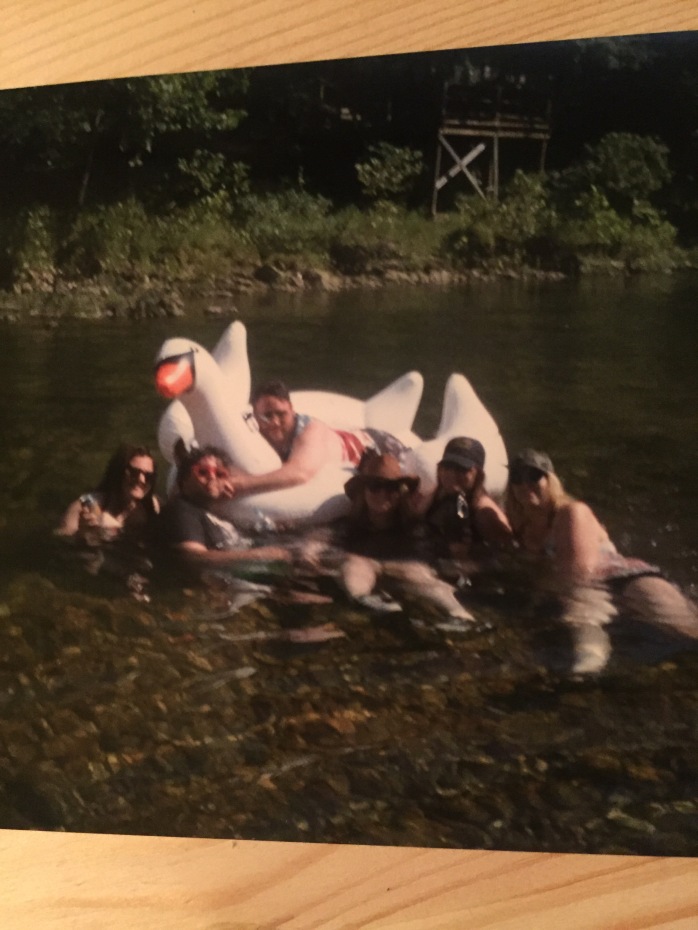 Our hot but super fun lake trip with mine and B’s parents: 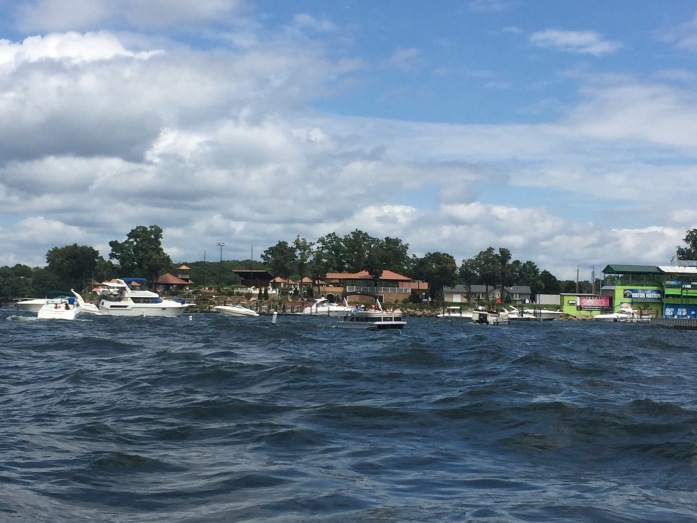 Grandma tried Fireball. She insisted it was too strong!

I sailed on this pirate ship for my bachelorette party a few years ago!

There is a hidden doe below. 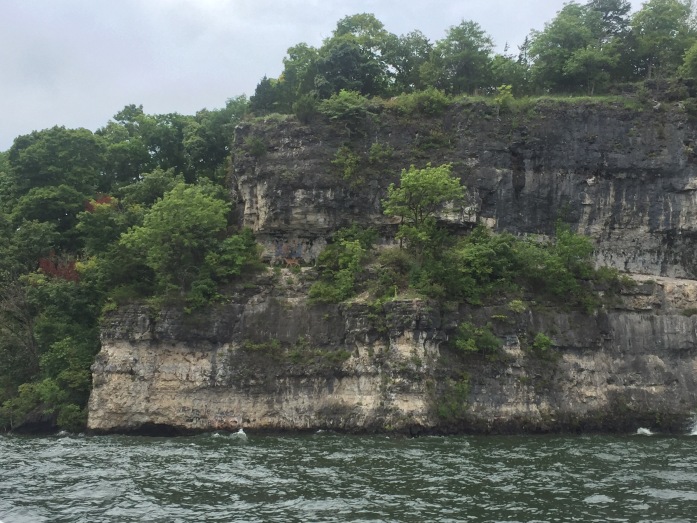 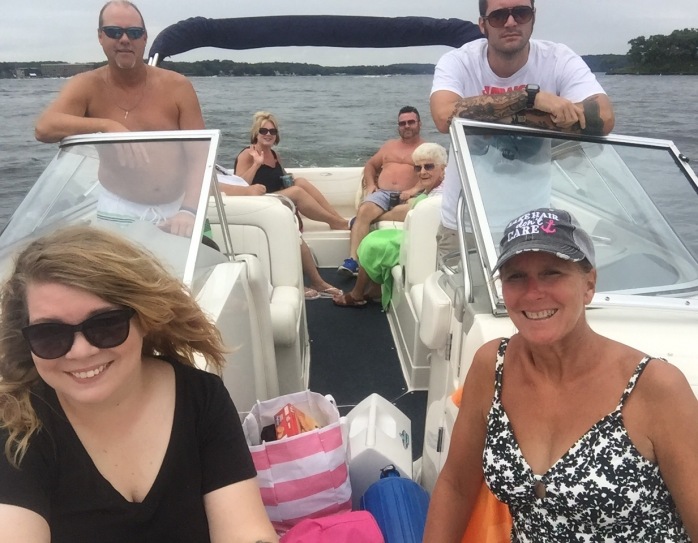 Margaritas on the dock! 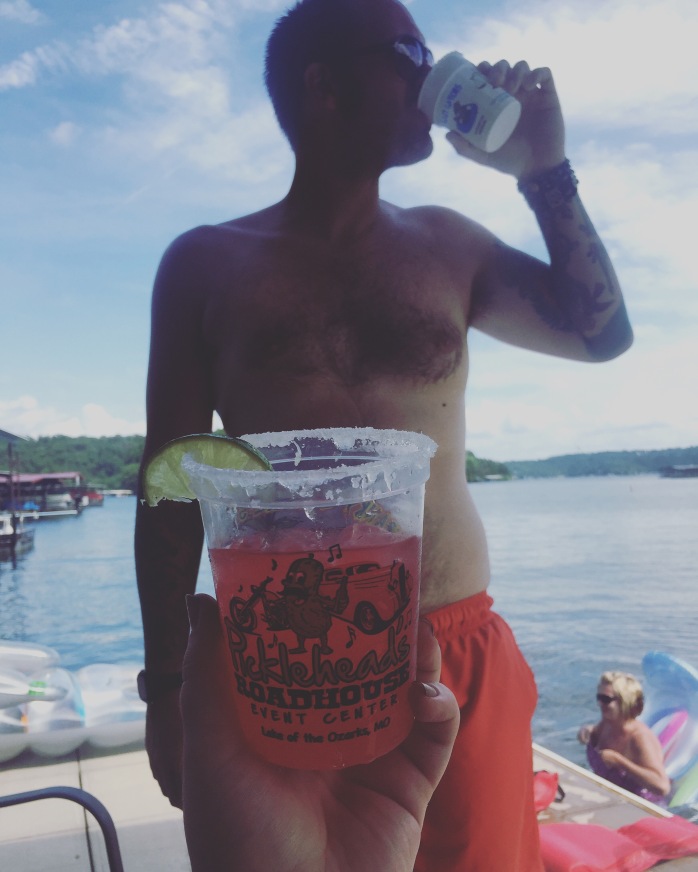 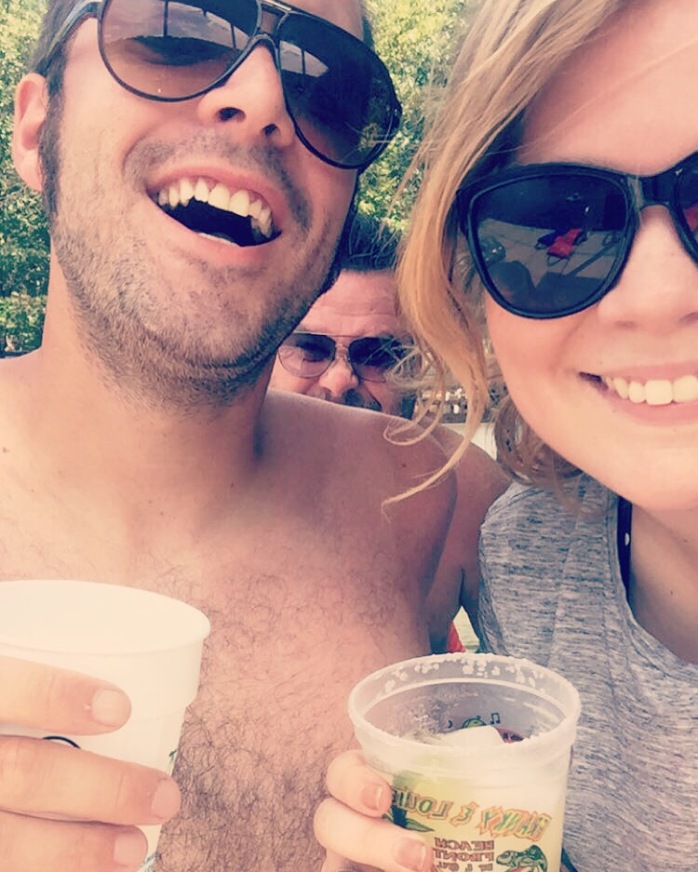 Grandpa’s 70th birthday and engagement lunch. He and his lady friend wanted to go ziplining so we took them to Aerie’s winery at Grafton Ziplining.

How cute are they?! So happy my grandpa has found happiness. =)

Also side note: after my grandma passed last June, my grandpa put their beautiful house up for sale. Nobody was interested in it!!! We were in disbelief.

One month ago my sister put HER house up for sale and it sold within two weeks, so she and my brother in law will be buying my grandparents house. It warms me to the core knowing we will still get to have our family holidays there. The day my sister and her husband decided to buy my grandparents house, the neighbor across the street snapped this photo and sent it to my dad. I think my grams was pleased with the way things worked out. ❤️

Babes in Motoland 2. Let me stress again: I am not a motorcyclist. I have ridden on them, I have operated one, and I grew up with a scooter/moped. But I am in no way an experienced rider. Do I want to be? I really kind of do. After spending a weekend with ladies who ride, how could it not influence you?!

The drive down was…apocalyptic. Take a look! K and I followed M on her bike, while we were in a car. About 20 miles outside of Peoria it began to look ominous. We drove into the clouds and soon the rain began to pelt down. White blinding sheets of rain. We pulled under an overpass and M met Bob, a retired police officer from Minnesota. 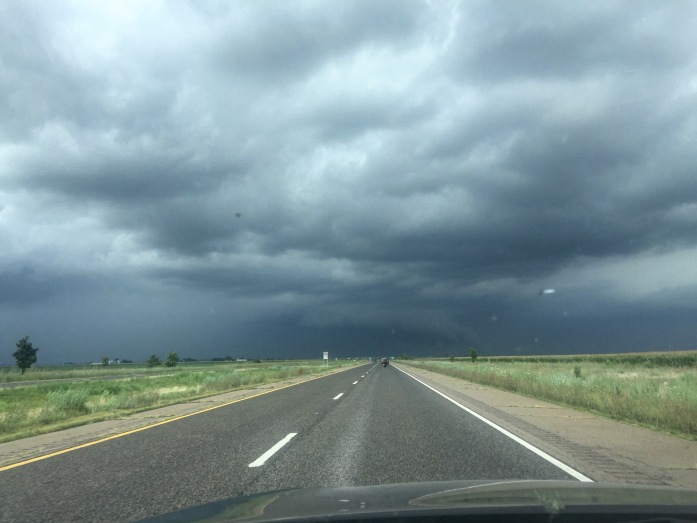 They spoke for a few minutes and M came back to the car. “You guys should probably go ahead. We will be sitting here for awhile according to radar. I’ll meet you in Peoria after the rain passes!”

K and I felt a little weary leaving her behind but she reassured us she was under the wing of someone she felt comfortable with. K and I picked a restaurant and texted M the directions where she and Bob met us 2 hours later (yes…one hour and 30 minutes they were trapped under an overpass in pouring rain!) M was soaked. We still had a 2 plus hour trip ahead and it was getting dark. Not so safe for a motorcyclist.

(K and I took full advantage of the 2 hours we waited for M to arrive with flights of craft beer and Brussels sprouts.)

We arrived at our campsite late, about 10pm. It was buggy and muggy and we were just relieved to be able to set up camp. The next day however was one of the best days I’ve had in a long time. The weather was beautiful. We explored Savanna, Illinois and some of the surrounding towns. 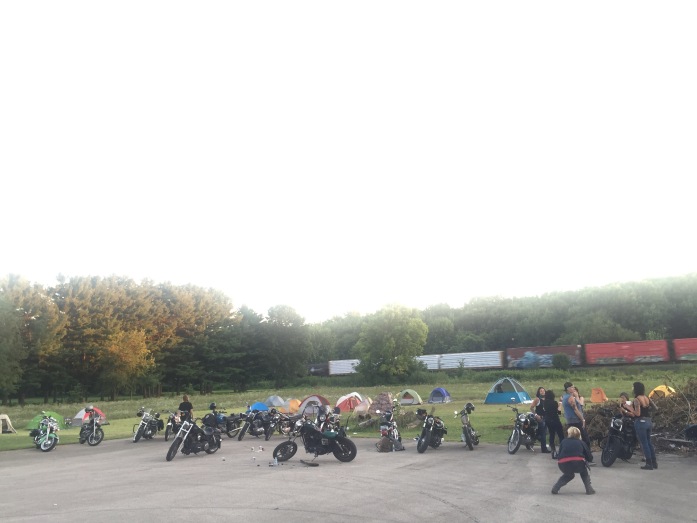 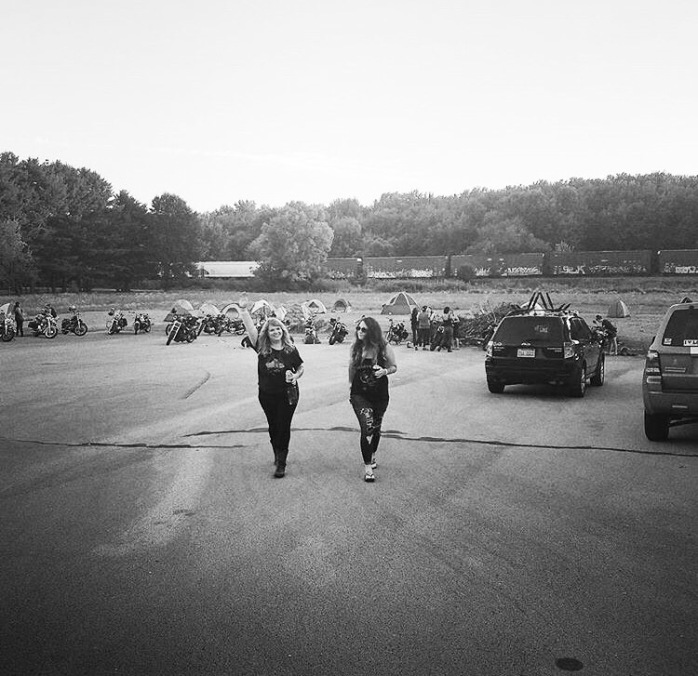 Iron Horse Social Club in Savanna is a bar, a moto museum, and a wedding chapel!! 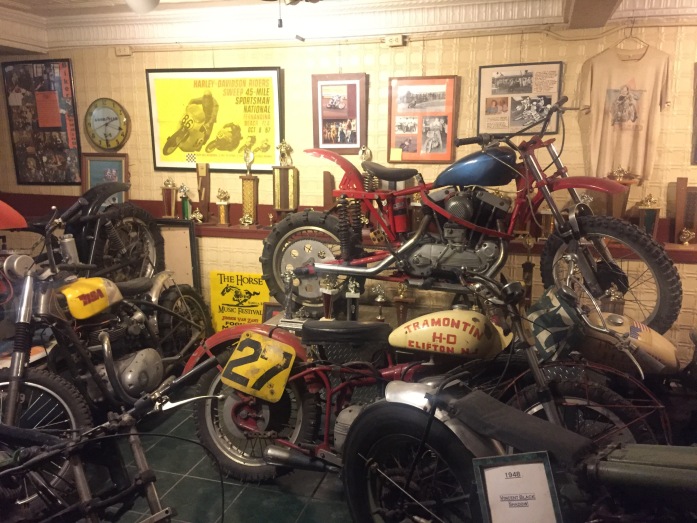 Also part of the little Savanna is a civil war museum, and within that is a room that is filled with an intricate and amazingly detailed model village and train set that truly takes your breath away. It is modeled after times past and as you look on, a soft spoken and gentle volunteer of the museum shares the history and runs the trains to show you how the engineering industry has kept the small town alive for years. 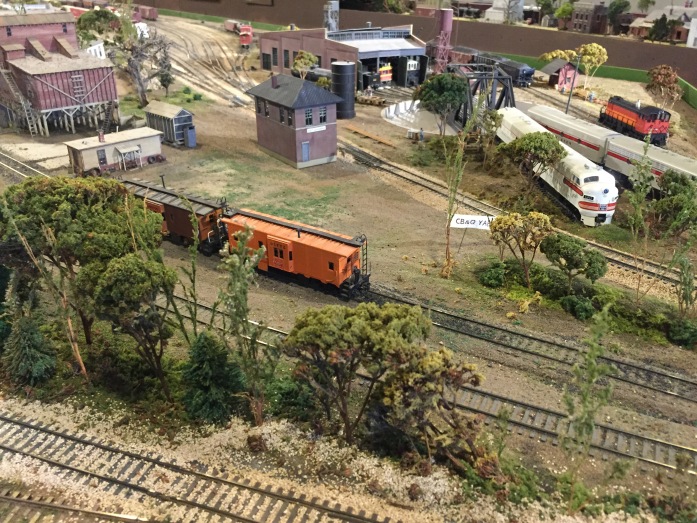 We left Savanna and explored surrounding towns, checking out local watering holes and wineries. When we returned back to camp this day, it was time for some food and beer. We sang karaoke and danced until 2am. It was so much fun.

A group photo of us and some of the girls we met. Unbelievably rad ladies! 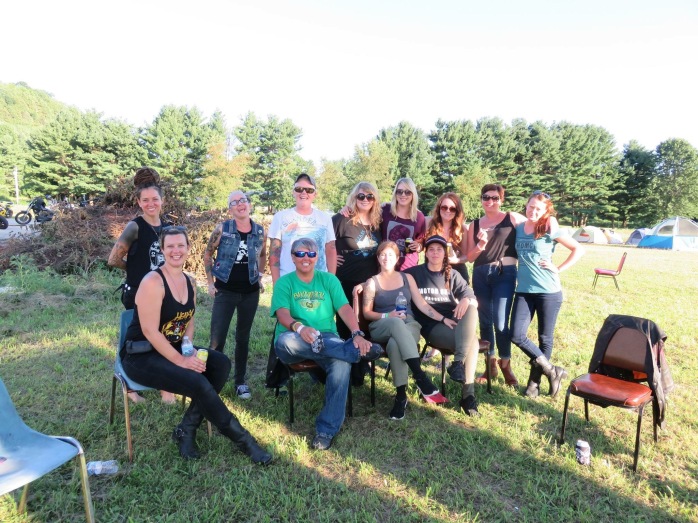 The following week was hard. After a wonderful and memorable weekend, I found out Andy passed away last Thursday. I won’t get into that but it’s been a rough one for me. He was one of my best friends for years. I will miss him for the rest of my life. He was a beautiful kindred spirit. Someday I will make a post about him. My senior year Homecoming 2001/2002:

When I lose someone, all I want to do is travel. Next weekend of course is our Smoky Mountain trip as I said before. But in a perhaps grief stricken moment of needing to escape, I booked a vacation for us in January to Vegas for two days with my sister, and from there B and I will drive to the South Rim and stay in Flagstaff for a few days. I just love having something to look forward to. And the west has my heart these days so…here we come =)

I still need to post my REI birthday haul too. I got some great gear that I cannot wait to use in the coming months.

Thanks for following along.